The great Goethe once said “...the making of a good wine is difficult, but even more difficult is finding a proper way to drink it.” Here “proper” definitely means: in the company of good friends and tasty culinary delights. The owner of the Orbelia Winery, Mr. Kostadin Chorbadziyski, completed the more difficult part of the task long ago. For many years now this businessman from the town of Petrich has been making wonderful meat delicacies, while good friends have been there along the way. As for good wine, it is already being produced in his new winery – Orbelia Winery in the village of Kolarovo in South-Western Bulgaria.

Chorbadziyski is a typical representative of the contemporary generation of Bulgarian entrepreneurs. He graduated the University of Food Technologies in Plovdiv, Bulgaria, and started working for a meat-processing factory. After the fall of communism in 1989, he opened his own factory with similar activity. High-quality production helped his factory Mes-ko become a successful brand, while Kostadin Chorbadziyski was elected Chairman of the Association of Meat-Processing Enterprises in Bulgaria.

Together with friends he also established a factory for canned fruits and vegetables. And since good food goes with good wine, Chorbadziyski’s next step was naturally in the discipline of winemaking. From the very beginning the idea for establishing a winery was related to the intention to welcome tourists, so that they could enjoy local hospitality. This is why Chorbadziyski’s first try at the winemaking happened in the tourist-appealing village of Rozhen, also in South-Western Bulgaria near the town of Melnik. In 2008 he built a guest house there with a micro-winery and started making his first wines using traditional technologies.

Dinchova Kashta Winery (Dincho’s House Winery) was built in less than two years on top of the remains of an old peasant’s house. Chorbadziyski has no hesitation to put his own name on all this (Dincho is diminutive of Kostadin) as a clear sign of his passion and devotion to the new pursuit. The barrel room of this boutique winery is carved in limestone rock, just like the traditional family cellars in the town of Melnik.

The success of the Dinchova Kashta project convinced Kostadin Chorbadziyski to continue with his winemaking trials. It wasn’t long before he embarked on a much more sizeable endeavor: the establishment of a larger modern winery. Not long after his beautiful new winery – Orbelia Winery, opened doors in 2013 in the village of Kolarovo, situated at the foot of Belassitsa Mountains. With all the necessary equipment for making excellent wines and a very attractive design, it has huge potential for turning into one of the favourite rest stops along the wine route of Struma Valley Region.

The winery carries the name Orbelia, which in direct translation from the archaic Pelasgian Language means “The Snow-white Mountain”. Historical sources are ambiguous, but many of them state that this was the name of Belassitsa Mountains in ancient times.

Orbelia Winery’s architecture is in the local traditional style, while providing maximum comfort for both winemaking and wine tourism. The attractive degustation hall is on the lower level of the winery and contains a special ethnographic collection of household objects, used in the past in this area. Next to it is the spacious barrel room where the wine matures in oak barrels and ages in bottles in special wall niches. The winery is professionally equipped and can produce up to 100 tons of wine per year. A modern laboratory guarantees the quality of the wine. The barrels where the wine matures are made from Bulgarian oak and stay in naturally constant temperature and humidity levels.

Orbelia Winery offers mainly red wines, which is in line with the local traditions and climate conditions. The varietals are made from Melnik, Cabernet Sauvignon and Merlot. There are white wines as well, produces from the local varieties Sandanski Misket and Kerazuda (Keratzuda), as well as from Muscat Ottonel. The blended wines of Orbelia Winery are dominated by the indigenous Melnik variety.

The winery has its own vineyards in the area of Petrich and Kolarovo. The Melnik variety takes up the largest part: 3 ha of perfect relatively old vineyard. Another 3 ha are planted with Cabernet Sauvignon, Merlot and Sandanski Misket. Near the winery there are another 3 ha of Melnik, Cabernet Sauvignon and Merlot.

Kostadin Chorbadziyski’s enthusiasm and vigour do not end here. He has plans to build a new smaller winery in a guest house he recently acquired. After all the things he has done so far, is there anything else he could be dreaming of? “If only you knew how many ideas I have still in my mind… A lifetime will certainly not be enough to make them come true”, he end philosophically. Until then the lovers of good wine and culinary delights can have a long rest stop at the new Orbelia Winery in Kolarovo or at the guest house in the picturesque village of Rozhen, and discover the irresistibly tasty wine and food combinations. 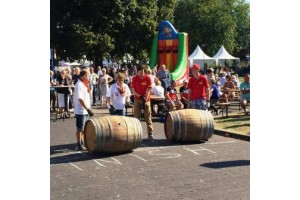